Tuberculosis (TB) has always been a concerned Public Health problem in India. The National Sample Survey (1955-58) conducted by ICMR showed that there were 4 sputum smear positive cases and 16 radiologically positive cases of pulmonary TB per 1000 population and the disease was equally spread in rural and urban areas. Bearing in mind the magnitude of the problem, an urgent need was felt to formulate a nati 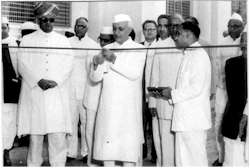 onal programme to encounter the TB burden in our country. Hence, the National  Tuberculosis Institute (NTI) was established in 1959 at Bengaluru by the Government of India in close collaboration with the World Health Organization (WHO) and UNICEF at the AVALON building made available by erstwhile Maharaja of Mysore.

The prime objective of the institute was to formulate the National TB Control Programme best suited to a country like ours, where the TB problem was huge and the resources were inadequate. Post establishment, the Institute undertook several epidemiological, sociological and operational Research Studies to understand the dynamics of the deasese and the draft District Tuberculosis Programme was prepared in the year 1961. This was pilot tested in Ananthpur district of Andhra Pradesh. The programme was mainly based on providing diagnostics and TB care services free of cost. The programme also emphasized on periodic supervision aimed to maintain improved work standards and replenishment of logistics. In addition, the Institute also trained the various key personnel to run the programme through District TB Centers. This nationally evolved TB Control Programme has been adopted by several other countries. Prior to establishment of NTI, most of existing knowledge of TB was only confined to its clinical aspects. NTI supplemented this clinical knowledge with Epidemiological, Sociological, Operational and Organizational studies to devise an effective programme for controlling TB in the community. NTI is a premier Institute in the field of Tuberculosis control in South East Asia, which caters to the human resource needs for TB control in the region. Since 1985, the Institute has been functioning as a WHO Collaborative Centre for Training and Research in TB. The Institute has a National Reference Laboratory for External Quality Assessment in the TB Control activity. It also provides technical support for Intermediate Reference Laboratories for effective implementation of Programmatic Management of Drug Resistant TB across the country.

The Institute had also served as the nodal centre for operational research related to RNTCP. The major activities as a nodal centre are to organize workshops and dissemination of research data through publications.

Objectives for establishing NTI were as under: